Incredible Devices Removes up to 99% of Pesticides

Pesticides HIDING in your Food!

This is a huge problem and it's getting worse. Every day new pesticides and genetic engineering methods are being developed and used long before we have definitive answers on their long-term health effects. As soon as one pesticide is finally banned there are a dozen more to take it's place. It's a constant scramble for which new pesticide will make it onto your food.

You may have heard of the dirty dozen. These are the fruits and vegetables you should avoid if you want to steer clear of pesticides. And, if you ignore the pesticides, they're otherwise some of the healthiest and tastiest fruits and veggies, including:

I don't know about you, but being told to avoid these fruits and veggies just because they contain too many pesticides is not okay with me! Why can't I eat healthy and NOT eat pesticides.

And buying organic, you're not safe from pesticides! In fact there are over 20 chemicals approved for use by the US Organics Standards. For example, Rotenone, which is an organic pesticide, is highly toxic, a known carcinogens and has been linked to Parkinson's Disease.

Even worse the National Center for Food and Agricultural Policy showed that Organic Farms use from 2 to 21 times MORE pesticide per acre than conventional non-organic farms.

Organic pesticides are still pesticides - they kill bugs! It's just that they're derived from natural sources instead of man-made. However, even though they are natural doesn't mean they are any less harmful to humans then their man-made versions.

Just to illustrate the point, arsenic is one of the most dangerous poisons known to humans, but it's also naturally occurring and not man-made. Just because something isn't man-made doesn't make it any less dangerous. Fortunately for us, arsenic isn't used as a pesticide.

Dangerous to Children, and  linked to Cancer, Parkinson's, and more ...

Studies have shown that the long term health effects of exposure to the chemicals in pesticides can lead to a tremendous range of illnesses.

For pregnant women and young children these chemicals have been shown to lead to developmental issues in the brains of infants, affecting their development as they grow. We all know how important the early years of life are so affecting your children in these years can lead to consequences for the rest of their lives!

But diseases of the brain don't stop with children. These chemicals have also been linked to cases of Parkinson's Disease and Alzheimer's. Parkinson's Disease causes shakes and tremors and eventually leads to a person not being able move or even talk. Alzheimer's causes a person to lose their memories, in some cases so much that they don't even recognize their own family.

And these chemicals have also been linked to a large range of cancers (Breast, Thyroid, Ovarian, Lung, Prostate, and Liver to name a few). It's a sad fact that most of us will know someone who has been afflicted by this terrible disease. Sometimes, even without any obvious reasons. But with all these silent killers in our lives is it really a wonder?

Silent Killers into your life”

How To remove Pesticides?

Washing is not enough

Unfortunately washing is not enough.

Removing pesticides from a single blueberry for example can be your worst nightmare. That blueberry can contain residue from up to 52 types of pesticides! And not all of them are water-soluble (which means they're sticky and won't be washed away by water). So no matter how much you wash with water you're not getting those off.

Baking soda and vinegar washes have been shown to be more effective than water but they're cumbersome, take a long time and still leave between 20-30% of pesticides behind!

However now there's a revolutionary new device called the Garrnish Pesticide Purifier that has been specifically designed to remove up to 99.9% of Pesticides. 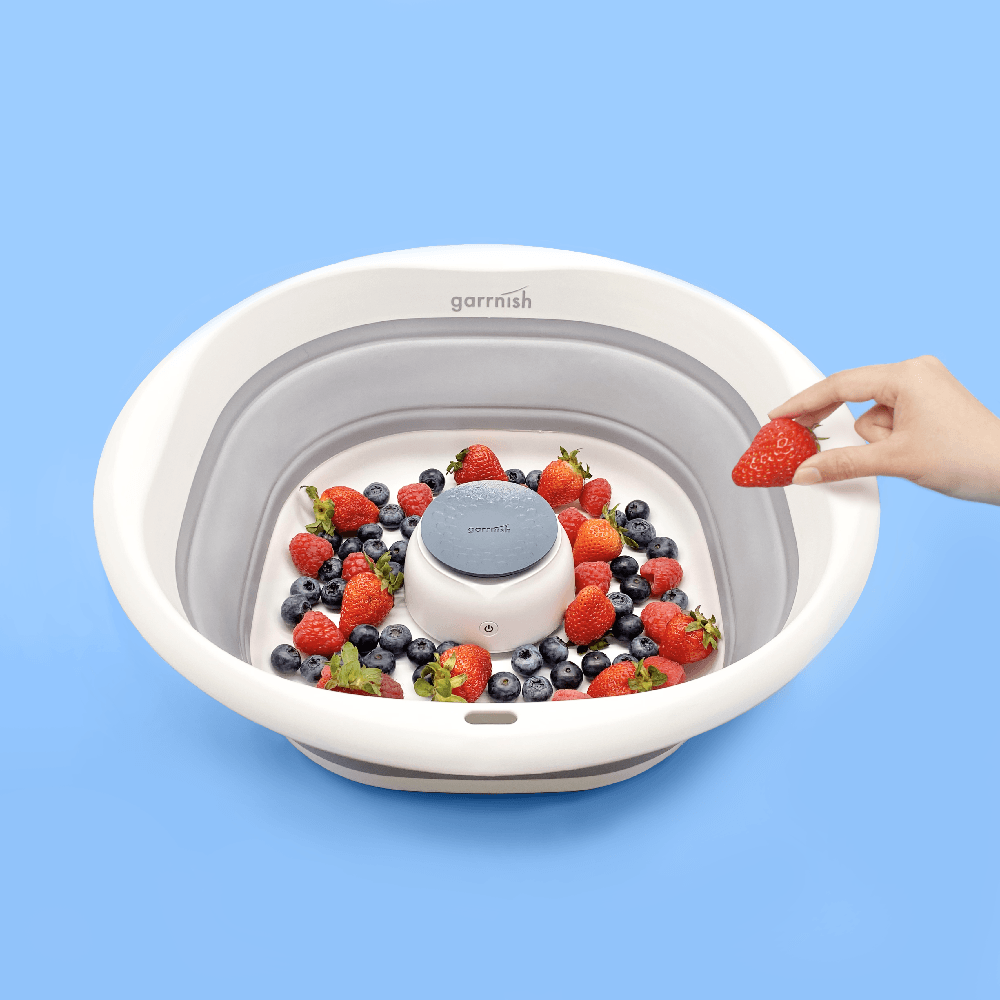 Garrnish removes up to 99% of Pesticides

Remember that a blueberry that had residues from up to 52 types of pesticides?

What if you could scrub those pesticides off at a microscopic level leaving virtually nothing behind?

Even better, what if you could not just wash them away but break them down so those pesticides so they don't even end up in the drain when you wash the water away?

All while being completely quick, safe and easy to use?

That's what a team of genius engineers developed over years to bring safe, pesticide free food to you and your family.

Garrnish uses low power electricity (like your phone) to create microscopic bubbles in the water.

These microscopic bubbles start to scrub away the pesticides from your fruits and vegetables at the smallest level, and along with Chlorine in your tap water (or a dash of table salt) break down the pesticides into non-toxic and harmless materials that won't pollute the environment down the drain!

After a few minutes, with virtually no effort, you're left with completely clean fruits and veggies (up to 99.9% pesticide free) to enjoy with complete peace of mind.

Garrnish is Quick and Easy to use 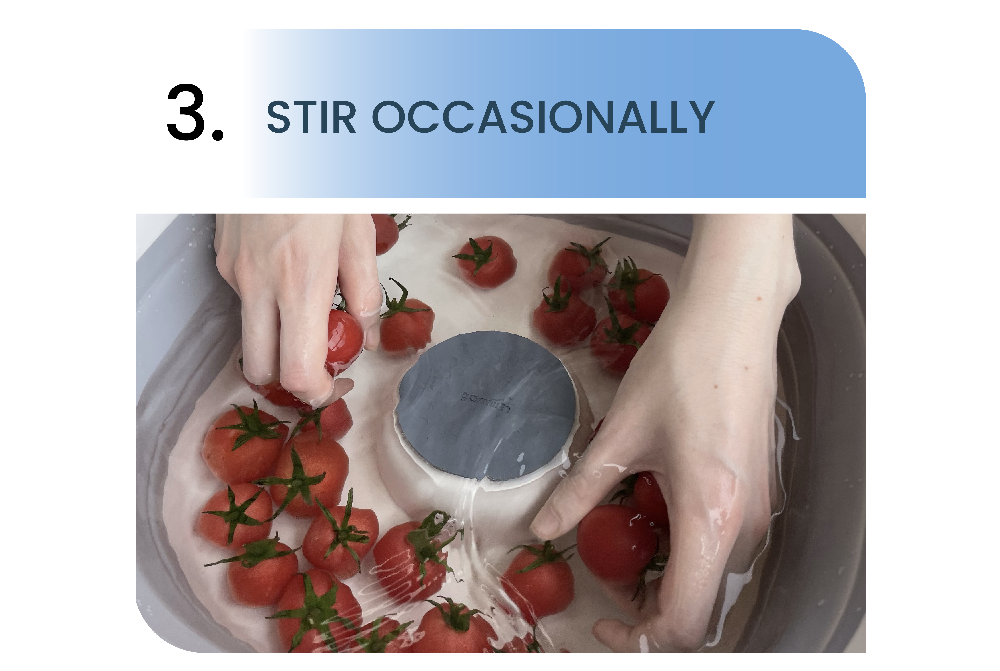 Garrnish is proven to remove up to 99% of Pesticides

How can I get Garrnish?

and remove up to 99.9% of Pesticides for me and my family?

After an overwhelmingly successful Kickstarter campaign, Garrnish Pesticide Purifier is open to a limited number of orders.

If you'd like to get your very own Garrnish to quickly remove up to 99% of pesticides for you and your family, please click the Check Availability button below.

If orders are currently available you'll be taken to a product page, otherwise, you'll see the next time that orders will be available.

The information and other content provided in this page, or in any linked materials, are not intended and should not be construed as medical advice, nor is the information a substitute for professional medical expertise or treatment. This device does not proport to treat or cure any illnesses.

If you or any other person has a medical concern, you should consult with your health care provider or seek other professional medical treatment. Never disregard professional medical advice or delay in seeking it because of something that have read on this page or in any linked materials. If you think you may have a medical emergency, call your doctor or emergency services immediately.

THIS IS AN ADVERTISEMENT AND NOT AN ACTUAL NEWS ARTICLE, BLOG, OR CONSUMER PROTECTION UPDATE THE STORY DEPICTED ON THIS SITE AND THE PERSON DEPICTED IN THE STORY ARE NOT ACTUAL NEWS. RATHER, THIS STORY IS BASED ON THE RESULTS THAT SOME PEOPLE WHO HAVE USED THESE PRODUCTS HAVE ACHIEVED. THE RESULTS PORTRAYED IN THE STORY AND IN THE COMMENTS ARE ILLUSTRATIVE, AND MAY NOT BE THE RESULTS THAT YOU ACHIEVE WITH THESE PRODUCTS. THIS PAGE COULD RECEIVE COMPENSATION FOR CLICKS ON OR PURCHASE OF PRODUCTS FEATURED ON THIS SITE.